I am sad to announce that we will no longer be offering the free versions of MineChat.  There are many reasons for this, but I will discuss just a few.

Working on MineChat and mobile apps in general is not my full time job.

I did this for fun to begin with and did is as a challenge to see if I could make it work.   So four years ago I launched the app and it was a raving success (you can read more about it in this blog post http://www.minechatapp.com/uncategorized/how-minechat-was-born/ ).  Over the years it has been a roller coaster ride of daily users, we have had over 1 million downloads across all platforms.   But today we just do not have enough users to make up for the amount of effort that has to go into the app.   I don’t know if this is because Minecraft is on a decline, my terrible coding or people do not want to be bothered with ads in an app.  But its clear that its just not sustainable on the current path.

“One million downloads?!  What are you talking about, you must be making bank!”

Nope, it doesn’t work that way.   Ads in mobile apps is a very tricky business, that alone is a full time job.   On average you need to show 1000 ads to make 30 cents, yep you read that right, 30 cents for 1000 displayed ads.  Some days its as low as 15 cents.  I have tried many ad networks over the years and Apple paid the best at about 45 cents, but they completely stopped their ads business last year so that vanished.  Another problem is that MineChat does not lend itself to ads.  Most games have “levels” or a stopping point where an ad can be shown.  That does not work in a chat app as I am sure you are aware.  You will be in the middle of typing a message and a full screen ad pops up.  I never liked this, but there was just no other way to do it.

“So MineChat is going away?” Absolutely not!

I will continue to improve, support and maintain the paid version of MineChat.   I hope you choose to download it for just $3 and get the benefit of no irritating ads.  If you currently have the free version installed, it will continue to work and work with the current version of Minecraft 1.12.2.  Our MineChat users have always been the best and I hate that I have to discontinue the free version but that just the current state of things.

As always, email me (from the about page in MineChat) with any questions or comments.   I am looking forward to continuing to improve MineChat and work with you guys to make it the best Minecraft chat app available.

We have now added support for Minecraft Realms. If you haven’t heard of Realms, you can read more about it here https://minecraft.net/en-us/realms/. But its basically an easy to use hosting solution for small worlds. Connecting to your Realms server is easy with MineChat. You must have already setup you Realms world and accepted the TOS (Terms of Service) in Minecraft. Once that is done, your worlds will show up in MineChat automatically!  As always, let us know if you have any issues using MineChat. 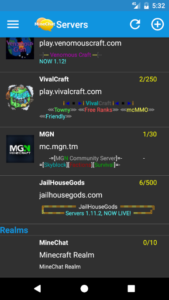 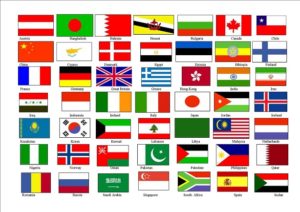 As you may have noticed, we have begun adding translations to MineChat, but we need your help!  If you want to see MineChat in your language and want to help, then become part of the project.  Then just email us your Google email address and the language you want to translate to.   We will send you a Google docs collaboration email with instructions and you can get started.   It should only take about 30 minutes to translate everything.   Thank you for your help and supporting MineChat!

To participate, email support@minechatapp.com and include the language you want to translate. 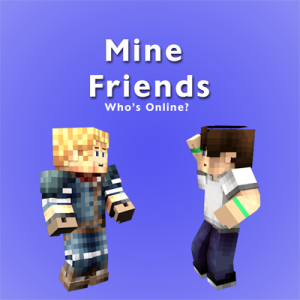 We are happy to announce the MineFriends Beta.   What is MineFriends you ask?   Its a way to know when and where your friends are Online.  You are probably familiar with the Friends feature in MineChat, but that has several limita

tions.  Not all servers support sending the players list and most are only configured to send 12 random players at most.  So friends don’t always show up when they really are online.   MineFriends solves all of those issues!   It will show when your friends are online on any server that is running the MineFriends plugin.

How Does it Work?

What About Privacy, “I don’t want people to know when I am online!”

MineFriends works in the same manner as Facebook.   You send

your friend an invite using their IGN.  Once they accept, then you can see each other in your friends list.  They will only show up if they accept your invite.  You may also delete them as a friend at any time.  This will remove you and the other player from each others friends lists.

How Do I Participate In The Beta?

Remember, for MineFriends to work, you MUST have the server plugin installed.  It works on Spigot and Bukkit servers 1.7 and higher.   So you must either be the server owner or have his/her agreement to install the server plugin.   You must also  have an Android device.   There are still bugs and features missing so keep an eye on our Facebook page for updates.  It is likely that your friends or logins may disappear at any time if we have to do database updates and reset everything.  It is also likely that the app will no longer work after we ship to Google Play.  If you meet all of these conditions and still want to give it a whirl, send us an email at minechatapp@yahoo.com with the subject “MineFriends Beta”.  You will receive a link to the server plugin and beta version of MineFriends.   I look forward to your feedback and happy Minecrafting!

Thanks to Brandon Hyde for help with graphics.  The look will certainly change as we improve the look.  Also to Alpha testers Adnan, Jakesta13, MarcTheCool and jonathan.

I get the question all the time, “What gave you the idea to make MineChat”?  Well, here is how it happened. 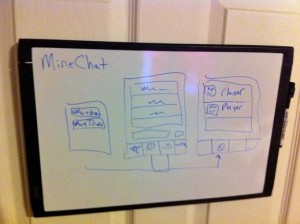 I have been a developer for 20 years (yes, I am old), and had been looking for an opportunity to make an iOS mobile app that hasn’t already been done 1000 times. No more candy crush like games!  Just before Christmas in 2012, my son, Spartin5543, and I, vbisbest, were watching a documentary on Minecraft called Minecraft: The Story of Mojang.   Spartin was already an avid Minecraft player and server moderator on a server called Blockmadness.  We started brain storming during the movie, and before it was over, we thought it would be cool to make a mobile app that could connect to a server and chat with your friends.  Seemed like it would be fun, useful, and most importantly, had not been done already.  So the very next day, I started researching to see how I could accomplish this.  I thought, “How hard could this be to just write some code to hook into the chat channel and chat away?”.   Man was I wrong! It was incredibly difficult.  Between following the full Minecraft protocol, stream encryption, and device performance, I soon found that this was going to be more than a weekend of coding. 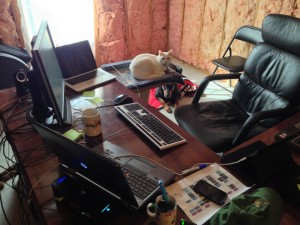 I was working my full time job as well so I had to code around my normal work hours.  I would work my normal job from around 9:00am to 6:00pm.  I would then start working on MineChat around 7:00pm till 12:00 or 1:00am.  Wake up around 6:00am and code MineChat till 9:00am where I started the cycle over again.  On weekends I would code almost all day.  Thankfully my wife was understanding and saw that I was on a mission and really wanted to make an awesome app.  After a couple of weeks, I finally had the guts of the communication working.  I was fortunate that Arriej would let us test MineChat on his Blockmadness server.  After all, I really had no idea if MineChat would crash the server, make everyone spawn at random places, or turn players into Creepers.  Really no idea!   When we started testing, we really didn’t have any issues. Minecraft was solid and the only issues were MineChat exploding on the device with ‘out of memory’ errors or garbage characters showing up in chat.  If MineChat is off in the stream by 1 byte, everything turns into gibberish (like &k) and you get disconnected (Yay, Protocol Error!) 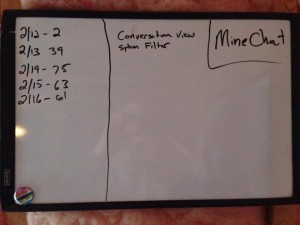 After 3 months of this routine, I had the first shippable version!   It didn’t have many features, but it was stable and did what it needed to do.   We released the first version of MineChat a couple days before Valentines Day 2013.   I had no idea of how many downloads we would get or if it would ever be a popular app.   Downloads were slow to start with because we did not do advertising. We only had the joined with MineChat message that everyone loves :).  But after a few months, word was getting around and we were getting about 1000 downloads a day for the free version.   Today we have over 300,000 downloads.  99% are the free version, and I am still the only developer, so I still have to work a full time job and maintain MineChat in my free time.

A big thank you to all of our fans out there!   We strive to be a friendly app and make MineChat as useful as possible.  Along the way, we picked up several awesome helpers.  Jaskesta, __Andan__, grt1010, JacobG, and Nintendoway are just a few who test MineChat before it goes to the app stores, making sure it works well.  Keep MineChatting, my friends! 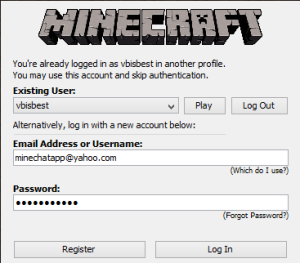 If you get an invalid username or password error, the cause is more than likely that your username is incorrect.  When Minecraft first launched, they used your IGN as the username.  Over time they started migrating accounts and switched to using your email address.  So as a first step, make sure you try both your IGN and Email address as the user name.  If that still fails, then you will need to use Minecraft to verify your credentials.     If you are already logged in, you will not be able to see the user name.  In the case you need to “Log Out” (see image below) and try logging in again.   If this also fails then you must have forgotten your  password.   In this case you will need to use the “Forgot Password” feature and reset your password.   Mojang will email you a new password and then you should be all set.  Try it in Minecraft first and make sure everything works.  Then you can use the same credentials in MineChat and be all set to chat away! 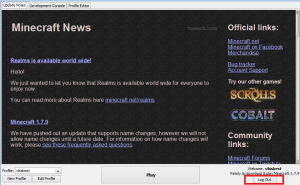 Acquiring Permanent Players:
Alright all of you Minecraft server owners, listen up! Especially all of  you promoted and featured server owners. You have plenty of new people entering your server using MineChat, but how do you know they aren’t just a one time visitor? If you are in need of players then maybe you could offer them something. Here are a few ideas to do this:

Just something simple so newcomers think “hey this is cool! I kinda like this server! I think I’ll stay and play more!” So just a small tip for you all, whether you already own a server or you are just now starting one. 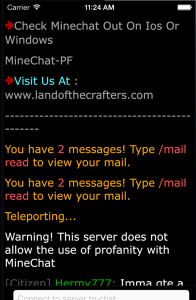 er:
We now have a profanity filter that server owners can enable. The filter will restrict anyone from using any high level curse words and prevents the sentence or word from being sent to the server for other players to see. in order to enable it: